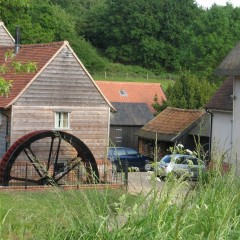 Here is a list of the key sustainable features of Assington Mill:

The ground source heat pumps, once commissioned, work without any problems or maintenance but their controls could be simpler.

The farmhouse is a typical small Suffolk timber-framed house, one room thick, which dates from the late 17th century, but there are re-used timbers inside from an earlier period. It has a steeply-pitched long-straw thatched roof over a timber frame, which is lime plastered, and the main chimney has been re-built to the pattern shown in a watercolour of 1880.  The new extensions at both ends are weatherboarded, and one has a hand-made plain tiled roof.  There are a few wattle and daub panels left inside but the major building works carried out in 2006 (by John & Stan Bradshaw of Assington) allowed us to insulate the other wall cavities with sheeps wool.   The flat-roofed l970s extension on the south side was replaced by a long lean-to conservatory for solar gain.  The original white Suffolk brick floor has been matched with hand-made bricks from local firm Bulmer Brick & Tile.

The softwood floors were so bad that they had to be replaced, this time in oak, and the doors (made by Simon Cousins of Wormingford) are all in chestnut. According to a 19th century census, 24 people once lived here. We suspect that some of them lived in the outbuildings.

The Domesday Book mentions a mill at Assington, together with “wood for 30 pigs, 5 horses at hall, 23 cattle, 60 pigs, 90 sheep, 6 beehives, 12 goats”. There is no other obvious site for a mill in the village, so we assume that it was here. The former watermill stopped working in 1868 when the squire “took the water for his own purposes”, and the miller, Walter Pollard, was forced to acquire a second-hand windmill, which came from Sudbury. The story goes that it was brought here by the aid of 21 horses at night, and only the vicar was allowed to watch. Sadly, there is no machinery left and all the floors were removed some 30 years ago to make a grain store. But Mark Barnard of Suffolk County Council found a picture of the mill 50 years ago which showed a wheel and, since the wheel pit is there (which provides the dimensions), we have had a new steel wheel made to fit it. The wheel generates a tiny bit of electricity, which offsets that used by the Mill Cottage..

The mill has a gambrel roof (see drawing above), with horizontal boarding inside where the grain bins once were. Outside, it is clad with featheredged weatherboarding.  Our free-range chickens roost all along the tie-beams at night.

This small building attached to the mill has clearly had a domestic use in the past, and we know that it was used as a guest annex just before the last war. It had lost part of its first floor, and the partition between it and the mill had been removed.

In May 2008, after six months of work by John & Stan Bradshaw, the floors and partition were put back and a one-bedroom holiday cottage created.  We have kept all the structural beams, and the internal boarding.  It is weather boarded in cedar on the outside with lime plastered walls where there was no boarding.  One sash window was saved and repaired; the other fit between the studwork.  The walls again are insulated with sheeps wool, and all the windows have secondary glazing.  The winding staircase is in elm and the first floors are in oak, with locally-made pamments to the kitchen and wetroom on the ground floor.  Heating is by a ground source heat pump and is all underfloor, but there is a woodburning stove for extra comfort.

There are lovely views of the big millpond from the north windows, from which you can see kingfishers and herons fishing and rainbow trout leaping.

This used to be a WWII prefabricated hut, but was replaced in 2004 by a spacious and elegant building made out of straw bales and rendered with clay, both off the farm. It was built by about 20 people, including some from Italy, Germany and Eire, on a course which lasted seven days, under the supervision of Barbara Jones of Amazonails. Barbara advised the owner of the straw bale house on TV’s Grand Designs. This is the venue for the craft courses. It has a pantiled roof, large double doors at each end, two sun-pipes (a tubular alternative to windows), a loo, which doubles as a shower room for campers, and a small tea point. The mix for the clay render was 4:1 clay:chalk, with chopped straw, water and a bucket of fresh cow manure, puddled by foot before being limewashed.

Many thanks to all those who helped with the construction.

This was built by students on the 2005 strawbale building course and is a circular round house, sitting on a car tyre foundation, with our own clay render on the inside and lime plaster on the outside.  Pole rafters we cut from the woods, before it was thatched by Dominic Mead.

This was the result of the 2008 strawbale course held here at Assington Mill, with Amazonails instructing.  It has two stories:  ground and first floor for bird-watching humans; roof space for barn owls.  It has a green onduline roof over lime plastered walls.  A pair of barn owls moved in in February 09 and since then eleven barn owl chicks have been raised and ringed.

This was constructed by the straw bale building course of 2011 and now holds some old farm machinery. This year, 2012, two pairs of swallows have taken up residence, thereby giving it the seal of swallow approval.

We could have incorporated even more insulation.  Initially we used a thin French insulation material on the roofs, which does not work as well as it claimed.

The ground source heat pumps, once commissioned, work without any problems or maintenance but their controls could be simpler.