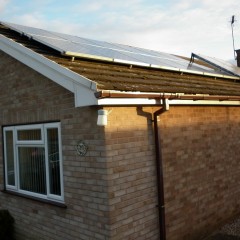 Photo Voltaic (PV)  panels were first considered some 5/6 years ago when I was installing solar panels for hot water but the economics were not good.  Last year I considered the matter again and found that the cost of installation had improved together with government grants and interest free loans made it a viable proposition and so went ahead  with a scheme which was was installed in January 2010.

The property was built in 1968 and had cavity fill inserted soon after that date.

The roof insulation was upgraded in conjunction with a scheme led by British Gas who installed additional glass fibre.

The property had Crittall double glazing initially but this has been upgraded in recent years with pvc windows.

Solar panels have been in use for water heating for five years. Original cost after grant £2500 for flat panels.

PV panels installed 2010 using Sharp NU 180 panels giving max 2.16kw per hour. It is expected that  I shall make a profit from FIT payments of of £800 pa on top of some reduction of imported power.

There were no planning obligations My main reasons with progressing all my projects were mainly economic and being conscious of the need to create a “greener” way of life.

I received grants of £400 from [the former] Clear Skies programme, for the Solar heating panels and £2500 for the PV installation from the Low Carbon Buildings Programme via the Energy Saving Trust.

We have a large garden and are almost self sufficient in soft fruit and vegetables in doing so much household waste is composted. Virtually all other waste materials are recycled by utilizing a church waste paper scheme and local authority services. Both my wife and I use local bus services when convenient.

I originally designed our bungalow and had it built. If I were to go through the process again I would certainly give greater emphasis on insulation at the building stage and would probably install ground source heat pumps which were not readily available in 1968 although I was aware of some through Technical College. In terms of the 2.16KWp PV performance:

3) Up to December 31st over 800kw. of generated electricity was used which saved over £100 on my discount daily tariff.

In both solar projects I had some support from Suffolk Coastal District Council although no planning applications were necessary.

The latest project was arranged through East Green Energy (Unit 1 East Green Farm, Kelsale, Saxmundham  IP17 2PH) and installed by Mosscliff Environmental (Wetheringsett, IP14 5QA).  Further assistance was given by Scottish and Southern Energy plc who assisted with grant applications etc. All of whom I would recommend.

Have received some media attention from the local press and BBC Radio Suffolk and also from the Open University who produced an article in the Independant.