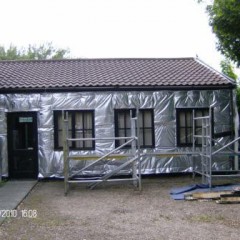 Claydon Court are agricultural buildings converted and extended to provide high quality, low energy office premises. The original conversion took place in the 1980s when energy efficiency was not an issue. We corrected this in 2010 with a major project, the programme of work for which is detailed in the attached from Real World Energy. The EPC rating was originally a ‘G’ but has since improved to a ‘B’.

Conversion of all fluorescent linear tubes to T5:

All existing fluorescent linear tubes to be converted to T5 fittings utilising Save it Easy conversion kit.

(Based upon our survey and calculations the conversion of the light fittings will result in a reduction of 14,247 KWh electricity. At a rate of 8.2p per KWh this is a saving of £1,168 with payback of 3.7 years and 7.7 tonnes of CO2 pa.)

Originally the barn and cart lodges of a dairy farm on the Old Ipswich Road, in Claydon, Claydon Court was developed into offices by a London auction house in the 1980s with little regard to energy efficiency. Original block walls along with plywood and minimal polystyrene insulation had been utilised to create office space that was externally clad with timber weather boarding.

Claydon Court’s current owner, Richard Parker, purchased the property in 1998 from an air conditioning company that had been based in the buildings and which had installed its units throughout. Richard explains: “The same air conditioning system remains in the property today but is now outdated, energy inefficient and overly expensive to operate and maintain and its replacement has been one of the main drivers for change.”

“The premises are home to several companies – a software developer, a charity and a recruitment consultancy as well as three companies that are part of the Strident group of companies. There are about forty people working here. Improvements have become a necessity; the building is too hot in warmer weather and under-insulated in colder periods, there is a clear requirement for improved efficiencies.”

In 2009, Richard met Julian Pennington who heads up RWES and invited RWES to survey Claydon Court. Julian describes the scale of the project:

“Richard was keen to find ways in which he could reduce energy consumption at Claydon Court to minimise costs and his Carbon Footprint. The project brief for RWES was to create the best value energy efficient building utilising the newly introduced Energy Performance Certificate (EPC) ratings.”

“It was agreed that RWES would develop the project to improve the building’s EPC rating from a current F rating to a B rating utilising the most cost effective methods. Not only would this reduce the overall carbon emissions from the building but it would also result in lower operational costs for the occupiers. The building would therefore become more attractive to prospective tenants and the space would be more demanded, allowing Richard as the landlord, to extend the building and create further quality office accommodation for the existing tenants and to attract new tenants to the offices.”

“As project manager for the whole development, RWES is responsible for all aspects. In a ‘live’ office environment we deal with existing landlord and tenant issues to ensure no disruption to services and function. We are extending the premises to provide an extra 1,471ft2 and have handled the land acquisition and planning application having appointed and worked with the architect Barefoot Gilles to design the extension; the co-ordination and integration of the new-build design has been carefully managed along with the refurbishment of the existing building.”

As project managers RWES has also acted in the appointment of the CDM co-ordinator for the project and organised the structural engineer’s soil survey, foundation design, asbestos survey and compliance with building regulations.

Highlighting the convenience of the using the SEH solution, the principle building contractor for the new build element of the project is SEH French Construction Ltd. By using a sister company, SEHBAC Commercial can ensure swiftness of delivery, has the assurance of knowing that the contractor is professional, skilled and reliable and can maintain strong communications to make sure things are done on schedule and to budget. The input from the contractor from the inception stage of the project has ensured design and build issues are covered from the outset to avoid nasty surprises.

RWES is undertaking the energy efficiency improvements to the existing building and are able to apply techniques and knowledge to the whole building and contribute to the design phase of the new extension whilst also focussing on the commercial realities of the project.

RWES is removing the external weatherboarding to install an effective insulation solution throughout with minimal disruption to the occupiers.

Large glazed areas overlooking the south facing courtyard are responsible for significant solar gain within the offices, which, will be significantly reduced by the installation of a timber framed Pergola. Not only will the offices benefit from the solar shading that is created by the Pergola, but it will also improve the aesthetic appeal of the building as plants such as Honey Suckle and Clematis will adorn the frame creating an attractive work environment.

In addition to the insulation and HAVC solutions RWES is also converting the internal lighting to ensure that fittings and lamps are all highly energy efficient and install an automated energy management system that will record the energy consumption of the building so that it can be actively managed.

As part of the Low Carbon Champion programme we received £3,000 to match fund the move to all LED tubes and £1,500 for cycles, storage, lockers, etc. as part of the Fresh Ways to Work campaign.

The project was a major success. The only other major issue now is solar glare on large windows which may be offset with special film. Only disappointment is that despite promotion and keen cost we still have much vacant space!

Trees which will offset 60 tonnes of Strident’s and Claydon Court’s annual carbon footprint, have been planted in Golden Wood near the Green Light Trust Foundry in Lawshall