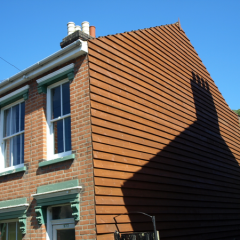 My home is a typical two bedroom brick built end of terrace Victorian house dating from 1893, which was quite cold to live in during winter.

The main sustainable feature is a ‘gable warmer’, which I have recently constructed using mainly 4”x2” and 3”x2” timbers, mostly from skips, infilled with 4” of Thermafleece wool insulation, covered with a breathable membrane and a cladding of stained fire retardant treated feather-edged timber boarding, a traditional local building material.

The gable warmer covers approximately half of the building’s 9” brickwork, upgrading 40 m2 of wall with U-value 2.45 W/m2/K to a new U-value of 0.34 W/m2/K.  This should reduce the heat loss on this element of the building from 98 W/K to 14 W/K, a reduction of 84 W/K and represents a potential overall reduction of around 20% of total energy costs.

To put this into context, double glazing the 15 m2 of windows in the house would reduce the heat loss of that element from 84 W/K to 42 W/K, a predicted reduction of only 42 W/K.  This is about half as effective and at probably twice the cost of a gable warmer, which can thus be said to be ‘four times better than double glazing’.

A gable warmer is the biggest and most efficient energy saving measure that can be applied to such a house, especially as a gable usually has no windows and therefore requires no special detailing other than at the edges.  There remain several choices of insulation material and cladding finish that should suit a variety of situations and finances available.

Since many houses are either end of terrace or semi-detached, this idea could if promoted provide a significant reduction in this country’s energy footprint.

My motivation was to invest in energy saving measures ahead of the price rises likely to follow the phenomenon of ‘peak oil’. Such cladding works on an elevation away from the highway are generally ‘permitted development’ in planning terms, but will require clearance under the Building Regulations in respect of both performance of the insulation and fire protection adjoining a neighbour’s property.

None whatsoever. It has always annoyed me that grants are offered towards cavity fill, but if you live in a 9” brick built house with no cavity, the only way is to effectively build a cavity as I have done.

I have been recycling and using public transport for many years now and see these works as a way to further reduce my environmental footprint.

Since fitting the insulation I have noticed a marked rise in comfort levels inside the house especially through the last two winters’ cold spells, which used to be miserable times each winter. Comparing my energy bills for these last two winters with the previous uninsulated one I have made a consistent saving of 15% over the two coldest quarters. Considering the absence of the final boarding layer until this spring and the comparative hardness of those two winters, I think the gable warmer has performed much as predicted.

I have obviously used my own skills as a Conservation Architect for the planning and detailing of the works and looking back can now say I enjoyed the challenge of actually building this for myself. The boarding came from Arnold Laver of Bradford and was treated by Arch Timber. The insulation came from ‘Earth and Reed’ of Needham Market and other materials that were bought came mostly from the local Jewsons. I am grateful to Ipswich Buddhist Centre for the loan of a tower scaffold.