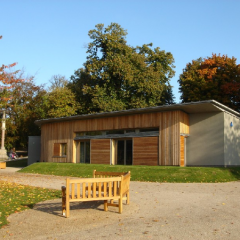 The Reg Driver Visitor Centre is a first for Ipswich.  It sits in the heart of the Grade two heritage listed Christchurch Park and it replaces two older ‘buildings’ and adds a new element.  The Park was refurbished as part of a Heritage Lottery Funded project.  The Visitor Centre, a centrepiece of the project, was designed to allow the removal of several smaller garages, sheds and a utilitarian toilet block.

The aim was to allow the public to learn more about the Park’s history and wildlife, provide a venue for meetings and events, offer high quality public facilities and bring the public into contact with the Park staff.

The Centre was designed to be as eco friendly as possible.  Therefore it contains several eco features and was designed to fit into and make the most of the surrounding landscape.  Costs for each item are difficult to ascertain as it is new build.

Large windows on south facing prospect fitted with ‘K’ glass to allow heat/light into what is a heavily insulated building.

Under floor zoned heating allows different parts of the building to be heated at different times.

A Gilles 50kw woodchip boiler.  Heats the building and all the hot water.  Automatic system that only requires a little cleaning when replacing woodchip.  Cost Approx £30k to install boiler – obviously requires separate woodchip store.  Installer suggested 30 ton of woodchip a year – we have used approx 21 ton.  Their estimated carbon saving is 38ton. Running costs are similar to that of Oil/LPG.

Green Roof.  The Centre utilises two different depths of green roof.  The shallow roof sustains sedums and a larger area is planted with tolerant shrubs.  The Green Roof is for insulation purposes but also locks away co2.  The deeper roof is very much a feature as the cost of installation would take many years to recoup.

Rainwater harvesting provides up to 75% of the toilet flushes in the building. Cost savings are presently unmeasured.

Taps use combination of ‘spray technology’ (for handwashing) or aerators to combine air and water (kitchen sink).  This reduces water flow.

The Centre is the first Park Visitor Centre in Ipswich.  It is new build and was funded by the Heritage Lottery Fund.  This was a great opportunity to provide a showpiece building that can be viewed from above as well as ground level.  The building was not only designed to interpret the Park but the eco features it contains.

Various grants were applied for during the building stages.

The great thing about this being a public building is that people can see the features in action before taking the plunge themselves.  We had several visits from neighbours who live in Victorian properties nearby – they all wanted to see the sun pipes as they had light issues in hallways.

The building is a showpiece but also a working building.  Had it been private dwelling or business property the green roof would probably not have been financially viable.  The infrastructure necessary was vast and costly.  Having said that every other feature has proved worthwhile.  We aim to be producing our own woodchip within Ipswich within a year and this will bring costs down immensely.

The building was awarded a High Commendation from the Ipswich Society Awards in 2008.