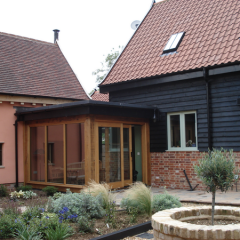 This is a recent conversion of a traditional timber-framed Suffolk barn, coupled with the restoration of a Grade II listed Tudor timber-framed public building (reputed to be the smallest surviving such building in the country) and the linking together of the two buildings via a contemporary link building into a single dwelling house. The dwelling house consists of a lounge, open hall, kitchen dining room, entrance hall, link building, dining room (the listed Tudor building), utility room, sun-room and four bedrooms, two of which are en-suite. The conversion and renovation project was carried out in 2009 and 2010.

Mid Suffolk District Council (MSDC) Building Control, in their Certificate of Completion process, have awarded an Energy Rating of 64 and an Environmental Impact (CO2) rating of 78. Energy use is estimated by MSDC at 135 kWh/m2 per year, with CO2 emissions of 5.7 tonnes per year. It is believed that these estimates are conservative as they assumed an air-tightness of 10 m3/h.m2, whereas an as-built level of below 5 m3/h.m2 is more likely.

Conversion and renovation of the property is to modern building standards and insulation levels.  In the renovated listed Tudor building insulating Heraklith “wood-wool” board is used along with sheep’s wool insulation between the wooden studwork in the walls and the rafters in the roof (Listed Building Consent condition).  In the main barn and the contemporary link building Celotex rigid insulating expanded polyurethane foam board is used.

Three EWF Darkline solar thermal panels are installed on a south-facing 35º pitch roof.  The solar panels are controlled via a Resol Deltasol BS3 controller with temperature sensors for the collectors, hot-water cylinder and a heat quantity measurement counter (counting the number of kWh generated by the solar panels).  It is estimated that the solar panels will produce around 70% of the hot water needs for the dwelling (averaged over the year, ranging from 93% in the summer to only a small contribution in December/January).

The principal heat source is a 16 kW Daikin Altherma air-source heat pump.  The heat pump is installed on an E-ON “Economy 18” electrical supply (reduced tariff for 18 hours each day) with automatic switchover back-up to the 24 hour ordinary electricity supply if necessary for the three two hour periods each day that the Economy 18 supply is not available.  Hot water storage is in a Daikin Altherma 300 litre unvented cylinder.

A Villavent VR700E whole house heat recovery system is installed to extract warm, moist air from bathrooms, utility room, etc., and pass this through a loft-mounted heat recovery unit that distributes warmed fresh air to habited areas such as the lounge, bedrooms, etc.

On the ground floor all heating is via a Uponor underfloor heating system, with each zone (room) individually thermostatically controlled.  The underfloor heating is controlled by a Honeywell I-35 controller that has a time programmable “eco-function” that overrides the normal thermostats and operates the heating at 4ºC lower than the individual controllers.  This does not allow the system to fully switch off thereby preventing the floor slab from going completely cold.  Heating to first floor bedrooms and bathrooms is via conventional radiators and towel-rails, each thermostatically controlled.

Stovax wood-burning stoves are installed in the lounge (Stockton 8 model) and the dining room (Huntingdon 28 model).

Total cost of the eco-solutions described above was approximately £30,000.

The planning process for this project was complex and time-consuming taking about two years in total.  The main barn, whilst not separately listed, was “curtilage listed”, so a Listed Building Consent was necessary (as it was for the separately Grade II listed Tudor public building).  The Tudor building was listed as a “stable” and it was only after a detailed Archaeological Survey (which was, in itself, a condition of the MSDC Planning and Listed Building Consents) that it was revealed to be a building of “national importance”.

There was the usual tension between building restoration (and preservation) and the incorporation of modern, energy-efficient building materials and methods throughout the project.

A condition of the Planning and Listed Building Consents was that the reaching of various stages (milestones) in the project had to be reported in writing to the Planning Authority so that they could visit the site and check on compliance.

The owner/occupier moved into the house in June 2010 and after one year has been able to assess total energy usage (heating, lighting, cooking, all electrical appliances, etc.) as about 20,000 kWh, more than 65% of which has been supplied at the off-peak tariff rates.  This consumption is broadly in line with Mid Suffolk District Council Building Control’s predictions in their EPC.  It should be remembered that the winter of 2010/11 was one of the coldest on record so this could be regarded as the worst case energy consumption scenario.

During the summer months the solar thermal panels are operating efficiently delivering the majority of hot water needs and the heat pump is rarely needed.

The whole house heat recovery system is operating efficiently and keeping bathrooms dry and condensation free.  Trickle ventilators (although fitted on all windows) are kept closed to maintain the air tightness of the house.

Running costs for the total energy demand (including electricity and solid fuel for multi-fuel stoves) for this house are significantly below £2000 per annum at current energy prices.