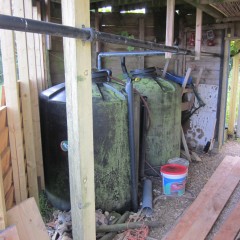 Top of the Hill is a timber framed building dating from the early 1600s with additions from 1984 and 1998.  It is located at the top of the steepest hill in Suffolk (hence the name) about 500m to the east of the village of Hartest.  Its appeal in 1984 was as a house which could be redesigned for 20th century living and also had a large enough garden to allow the family’s food to be produced on site.  When the house was initially renovated a number of the greener materials we now use were not available, but the general ethos was to build something which was, even then, as green as possible, better insulated than was strictly required under building regs, and generally more energy efficient.  Only in the mid 1990s did it become possible to start considering really green construction methods, and this ethos flows through the latest extension, with a number of add ons in the original house.  Babergh DC offered a free desk top rating, and scored the house at F despite the fact that it is now pretty much zero carbon!

The 1998 extension, and some refurbishments within the 1984 house, turned it from pale green to deep green.  This extension was built with a palette of highly sustainable materials, resulting in an embodied energy footprint better than ZERO carbon.  In other words, more carbon is locked up in the building fabric than was emitted in their manufacture and transport to site.

The building fabric is cement free.  Only natural limes are used for the load bearing elements, ie foundations (shallow) made using limcrete, brick plinths, hemp and lime walls 250mm thick, 8mm lime render and 1mm internal  lime plaster, limewash decoration external and organic paints internally.  Timber frame was largely recycled timber (from a Bury St Edmunds site) with some new wood from sustainable sources. Internal partitions and ceilings are finished with Fermacell board (with large proportion of recycled cellulose binders and natural gypsum).  Windows are softwood and stained.  Glazing has 16mm cavities but not low E as this was not really considered for normal use at the time.  Roof tiles are soft fired natural clay (lower embodied energy than hard burnt variety), and ridges are bedded on with pure lime mortar making them re-usable.

The project was self build, one building worker was employed with a part time mate and owners did some of the work themselves.  The overall cost/m2 of the extension was £490 (but remember it was completed in 1999).  This compares with equivalent projects delivered through commercial builders at rates of £700 – £800/m2

The main advantage of this type of construction is its vapour permeability and therefore the absence of moisture within the building fabric. The effect of this is to massively reduce heating loads, to provide hugely improved perceptions of comfort at lower temperatures, and to eliminate moulds, toxic gases and damaging house dust mites.  General health and well being are greatly enhanced in natural buildings.  Maintenance cycles are longer (limewash can be left for 15 years without recoating), painted surfaces with natural paints do not yellow as quickly as synthetic paints so redecoration cycles are much longer.

The house benefits from a number of zero carbon systems:

Rainwater storage and use for toilets and the washing machine with some irrigation (supplemented by well water) saving the 25KW used for each m3 of water delivered through the tap.

Hot water cylinders in series so that solar hot water goes into pre-heat cylinder, then into smaller cylinder for use (and temperature boosting).

Log boiler (Froling) and 2000 litres hot water storage feeding central heating and hot water systems burning about 6 tonnes of logs per year (equivalent to 24,000 KW hrs).  We were early adopters and fall outside the RHI sadly.

Wood burning stove used in very cold weather and at beginning and end of season (up to end October) in place of log boiler, and burning about 1 tonne logs (equivalent to about 4000 kw hrs)

Total energy use for house equates to around 30,000 kw hrs per year.  At 250m2 of heated space this equates to a total energy use of 120 kw hrs /m2 per year or exactly the allowed amount for passivhaus. In addition to this, all energy is now ZERO CARBON so the house can be classed as meeting the standards required by 2016 (now abandoned in the cuts).

Architect owners made this all very simple!  There were in reality no planning restrictions despite being in a conservation area because natural building methods are generally favoured by planners because of their ability to look right in a rural setting.  The motivation behind the project was to demonstrate that hemp construction is a viable alternative to brick and block.  Building Inspectors generally understand the benefits of soft construction methods after years of failing ‘hard’ buildings.

Users can make a huge difference to the performance of a building.  With careful controls fuel use is kept down (don’t allow anyone near the system if they don’t understand it), solar systems work best with 2 cylinders to avoid duplication of water heating, wood burners are great for early and late in the heating season when demand is low.

Food grown on site is critical – it reduces travel to shops, cuts out waste, provides lots to compost, and is healthier all round.

We work form home so travel is minimised – something the planning system should encourage a lot more by allowing space dedicated to non residential use.

Bikes are used for short journeys when its not raining.  The cars only get used occasionally.

The 1999 extension is very different in feel from the original house.  It is noticeably warmer, more even temperatures, quicker to heat up in really cold weather, much more draught proof, and with no mould.

Some things have worked less well – eg the lime floor in the garage which is not sufficiently robust, the ground floor where we store fuel is more vulnerable to mice which like the wood and can then remove the wall surface (plenty of mouse traps at the right time of year!).  The rainwater recycling system would have worked better if the filters had been lower down the downpipes (there are barely 1m and the vortex effect is not great enough to get good water collection rates) but our well supplies large amounts of water for most of the year to compensate.

Do you have a question for the case study owner…?