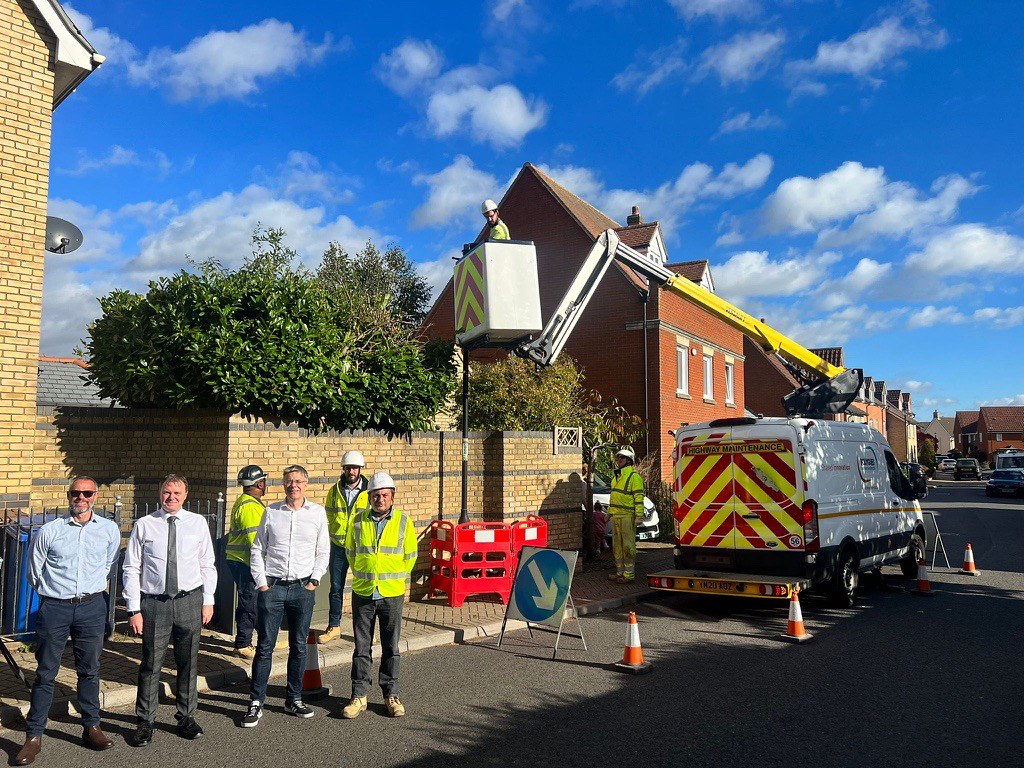 A project with the aim of replacing all 43,400 streetlights across Suffolk with sustainable, longer-lasting, and cost-saving LED bulbs nears completion.

It has saved more than £2.5 million pounds so far.

The change to LED streetlights supports Suffolk County Council’s aim to reduce carbon, light pollution, and bring down ongoing maintenance costs for the council, all whilst providing the best value to residents.

It was expected that the council would reduce costs by around 76%, however, the target was exceeded, with 77.64% savings made to date.

In June 2021, Bouygues Energies and Services were announced as the partner to deliver the project to upgrade 43,400 Suffolk streetlights with new, reduced energy LED lanterns. The total number of upgraded streetlights is currently at 40,692 excluding any of the Ipswich Borough Council, or Town/Parish council owned streetlights. There are approximately 1,700 upgrades outstanding, which includes any remaining heritage lantern upgrades. It is hoped that around 1200 of the remaining lanterns will be completed by the end of the year.

Prior to the commencement of the project, Suffolk Highways contacted towns and parishes to provide them with the opportunity to have their parish-council owned street-lighting upgraded at the same time. All heritage-style lanterns are also being upgraded as part of the project.

The upgrade of the lighting system will include a further rollout of SCC’s central management system which will allow lights to be switched on or off and dim individual or groups of lights.

This smart technology will increase the control the council has over its power consumption which will further reduce costs. The system will also automatically flag any lights that are not working which reduces the need for night-time inspections.

“It has been very exciting to see the incredible progress made on the LED streetlight replacement over the past 15 months. Our partner contractor, Bouygues has shown such resilience throughout which has resulted in a very well-managed programme and successful project.

“The shift over to these new LED lanterns has enabled the council to save a considerable amount on energy costs and supported our organisation’s ambition to become carbon-neutral organisation by 2030.

“I would like to extend my congratulations and thank you to all those working on this project and ensuring its resounding success. I look forward to seeing its continued positive impact in the coming years as we reap the benefits of stronger, cheaper and more environmentally friendly streetlights.”

“We are incredibly proud to have been selected as the preferred partner for this contract and it is very pleasing to see the progress the team has made to date. The energy-efficient LED technology combined with the Authority’s central management system will vastly reduce the energy consumption and in turn, increase the lifecycle of the equipment. Not only will this LED street lighting upgrade bring notable benefits to Suffolk’s local communities, but will also provide the client with significant carbon savings to help the County achieve its Net Zero ambitions. The decision to commit to this project and the speed at which our team in Suffolk have delivered the upgrade, has meant the Authority will also realise a return on investment of just over 4 years.”