Recent hot weather and steps towards a net zero future 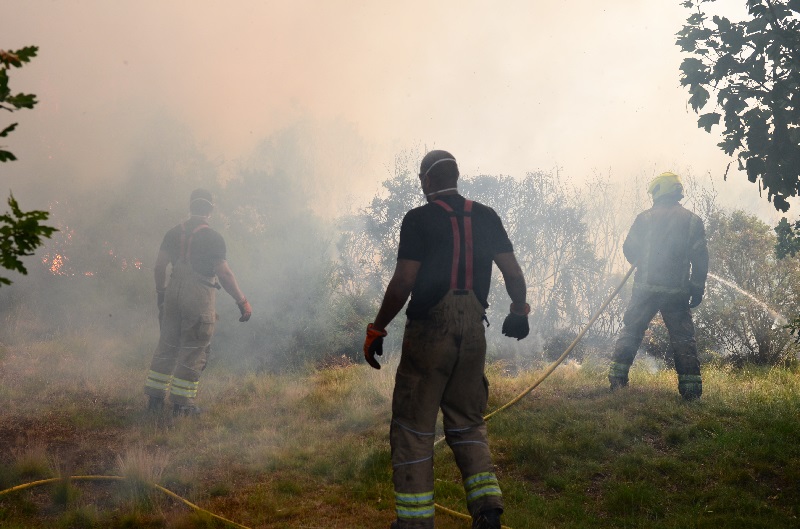 Last week, we experienced some of the hottest temperatures that Suffolk has ever seen and, due to climate change, these record-breaking hot spells are likely to become more frequent and last longer.

It’s not just hot days in the summer that we will experience – winters will become more severe, winds become stronger, rain becomes more intense and flash flooding becomes a greater risk. In short, we will see more extreme weather.

These extremes were witnessed first-hand last Wednesday at Carlton Marshes in Lowestoft, which saw a devastating fire take hold of 5 acres of grassland and hedgerow. Suffolk Fire and Rescue Service firefighters joined colleagues from Norfolk to successfully tackle the blaze, and they were due to reinspect the site later in the evening to make sure it was safe. But they were denied from doing so due to heavy rain and thunderstorms just hours later, which caused flash flooding at the visitors centre, as the ground was so dry.

Fires and flooding affect so much more than the physical environment. There is potential disruption, damage and distress to those living nearby, businesses, schools, transport links and not least the firefighters who put themselves at risk to save people and property – as ever, we owe them a debt of thanks.

Of course, nature is also hugely affected, with habitats lost and animals suffering in these extreme weather events. Suffolk and the UK has lost so much of its biodiversity in the last century, whether habitats like grasslands, pollinating insects like bees, or animals like hedgehogs. If nature is not allowed to thrive, our way of life will be drastically affected. Sir David Attenborough said:

But beyond the natural world, it is important to acknowledge that it is the poorest and most vulnerable who are most at risk from our changing climate. Whether that’s people living in areas with poor air quality and poor health outcomes due to a lack of access to green space, those who struggle to heat their homes in winter and keep them cool in summer, the rising cost of energy, installing flood prevention, or living with health conditions that are exacerbated by extreme temperatures. Not tackling and adapting to climate change would be a failure felt most acutely by those most in need. It is not separate to the cost of living challenges we face but a fundamental part of it.

So what can we do?

The vast majority of us now acknowledge that the Earth is warming up because we all emit too much carbon into the atmosphere.

We all have a responsibility to look at our energy use, and try to be more efficient. There are so many ways we can do this, from the food choices we make, the clothes we wear, the cars we drive, the journeys and vacations we choose to take, through to switching off electrical items when we don’t need them.

These may sound like drops in the ocean, but if we all make small changes, it soon adds up to something which has a big, positive impact.

The council, of course, has its part to play and I’m proud that there is a lot we’re doing – and we are constantly working to do more.

Together with other local authorities and organisations in the county, we have the Suffolk Climate Emergency Plan, which helps us all work together to achieve our ambitions of being Net Zero in Suffolk. This means that in Suffolk we have a co-ordinated approach to reduce emissions, on everything from transport to homes.

As Suffolk County Council, we are investing £12.8m to decarbonise our buildings, improving the biodiversity on at least 30% of our estate, moving our vehicles over to electric, installing rural charging points, supporting businesses on their Net Zero journey, generating our own energy from solar panels, planting trees and hedgerows, and so much more.

Suffolk is often highly regarded for how it is leading the way with its Net Zero ambitions, and as a council we were recently ranked as a Gold Tier authority in Uswitch’s Green Council Report 2022.

I hope that the recent hot weather hasn’t affected you too much. It does go to show that we are now experiencing the very real effects of climate change and it is impacting us all, in one way or another. But we all have the gift to do something about this, so no matter how small, let’s all play our part in striving for a Net Zero future for Suffolk.